Ahh winter, it’s the season of cuffing, pumpkin spiced lattes and frantically Googling if it is possible to die from frostbite. It’s for this latter reason that it’s also a time when the fabrics that make up your wardrobe become more important than ever.

Single-digit temperatures mean it’s time to stow your linen. Swap fair-weather fabrics for one of these seven heavyweight options and layer up in tactile – and yes, well-insulated – style.

Cashmere’s expensive, sure, but your investment pays dividends. It’s three times as insulating as wool, meaning you don’t need bulky layers to stay warm, and it’s an unalloyed pleasure against your skin, since the fibres are less than 19 microns thick – around a quarter the width of human hair.

That is, so long as it is unalloyed. If there’s no label in sight, you can tell the good stuff by rubbing it between your fingers. If it feels oily, it’s cut with lambswool, so don’t pay premium prices.

While that cashmere overcoat remains a dream, stick to accessories. A scarf in cashmere – or a wool-cashmere blend, if your budget is tight – will protect you from winter’s worst and offer a contrast to the textures in your tailoring. Alternatively, cashmere jumpers will keep you toasty without burning through your savings. A few years ago, it’s unlikely that any card-carrying member of club menswear would have turned to the world of outdoor pursuits for style advice. Fast forward to the present, however, and hiking boots, cagoules and even fleece has rambled off the mountain onto the runway.

The latter for good reason. Invented in 1979 as a cheaper replacement for wool, polar fleece (as it was then known) has proved over the years that its ability to retain heat while also wicking moisture away from the body is anything but second best.

As any hardened cragsman will tell you, a fleece jacket is essential during the colder months, and can be dressed up with dark wash jeans and minimalist sneakers. Or, for a more entry-level move, pull on the fabric’s properties via a pair of fleece joggers or a lined sweatshirt. Nature’s great insulator, wool — in all its forms: mohair, tweed, worsted et al. — has been prized for centuries for its ability to stand up to harsh conditions in colder climes.

When you can’t spring for cashmere, reach for Merino. Shorn from the eponymous sheep, it’s almost as fine as the spendier stuff and is also breathable and super-absorbent, making it the perfect base layer. Just ask the cyclists who prefer it to space-age materials.

But it’s not just good in sportswear. A Merino roll neck will regulate your body heat on those tricky-to-dress-for transitional days. Or for something simpler, Merino T-shirts are the ideal layering piece, able to retain heat while looking far more stylish than a thermal vest. 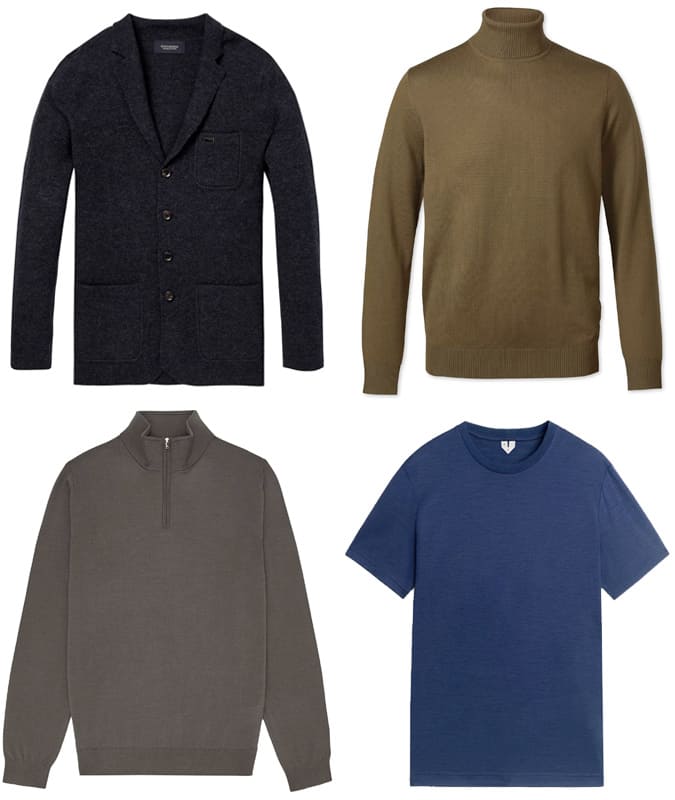 The cows have come home, pigs are taking to the skies and your geography teacher’s favourite fabric is now fashion-forward, thanks in part to Wes Anderson’s ubiquity on designers’ mood boards.

Match your fit to his; corduroy suits cut with breathing room in a narrow wale (that’s the space between the ridges), which will give your tailoring some texture and banish any thoughts of oxbow lakes.

A thicker wale means a heavier fabric, which traps more heat. Save Grand Canyon ridges for outerwear – a trucker jacket with a sherpa lining ticks off two trends without denting your pocket. When combative elements are on the approach, the military can always be relied on to provide functional menswear that keeps its wearer cosy and warm.

Shearling (or sheepskin, as it’s otherwise known) was originally added to pilots’ jackets for extra insulation during World War II, making it perfect for keeping warm during the winter months.

These days, the charge is being lead by the return on 1970s style, so deploy the plush stuff (or faux ‘borg’, for a wallet-friendly alternative) as a lining on coats and jackets, then pair with a roll neck. As is to be expected of a fabric commonly associated with the American outdoors, worn by cowboys, hunters and lumberjacks alike, flannel is nothing if not hardy.

The fabric’s distinctive appearance comes courtesy of fine metal brushes, which are run over the fabric to create a ‘nap’ – the raised fibres that give the material its softness. Beyond texture, the lifted material traps air and heat, making it the ideal counter to plunging mercury.

It’s the staple winter suit fabric, since its cold-weather credentials are bolstered by a matte appearance suited to greyer skies. With central heating and public transport putting paid to the true winter suit, opt for a for lighter fabric – 10-11oz – for tailoring you can wear from autumn to spring. Before Thomas Burberry’s textile breakthrough in 1879, waterproof clothing was rubberised, which kept the rain out, but the sweat – and smells – in. So as well as looking like Trawlerman, chances are you’d reek like one too.

Gabardine is the result of a new approach, which involved treating the fabric before the weaving process, making it breathable without compromising protection from the elements. And thus, an iconic piece of outerwear was born.

Today, gabardine is synonymous with durability. Gabardine suits are hard-wearing and hold their shape, ideal for damp commutes when you want to avoid arriving at the office wrinkled. Certain blends are even machine washable, for those days when you can’t seem to avoid the puddles.